It was just ten years ago on a hot evening, in late July, that our son’s dog Daisy – a beautiful golden lab mix – gave birth to a litter of twelve wiggly puppies. We watched in awe as one after the other was born, and were sad that two didn’t make it.  A number of weeks earlier a neighbor’s German shorthair, escaped his yard and jumped the fence to become the daddy. He passed on the traditional shorthair spots to several of the pups.

One pup was the largest of the litter, but acted like the runt. He had the bluest eyes and was also the shyest often hiding in the corner of the doghouse. He hung back when the others pushed their way to eat or play. He was mainly chocolate brown, but all four of his white legs had the unique spots of a shorthair, and so we named him Boots.  We picked him up often and held him. He clearly loved us. As we found homes for the others, I knew we had to keep him because he needed us. His eyes eventually turned uniquely golden, and we were so very taken by him. 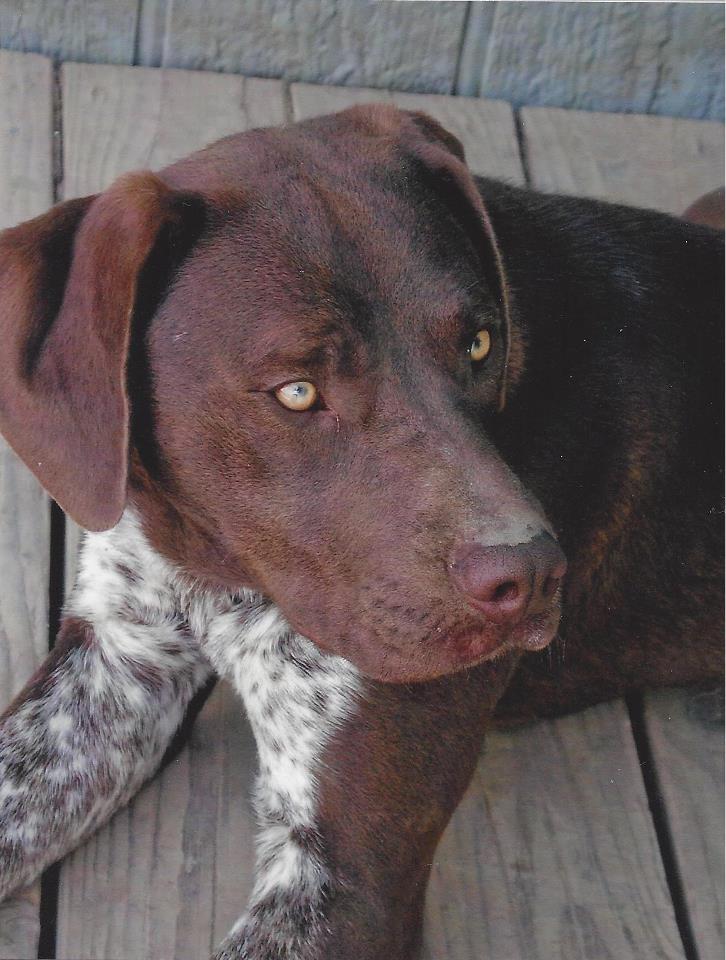 The boys nicknamed him “Bruitsi” after a pretty decent guy on the show “Prison Break.” Our Bruitsi was quite photogenic, and for a time our son set him up with his own Facebook page, which was very popular until Facebook discovered that he wasn’t a human and shut it down. To us he was almost human!

On the day that would have been his 10th birthday, I reflected on what he taught us.

Boots taught us that it is always good to have a playful attitude. Every morning when he got up, he would grab his blanket and race around the house expecting someone / anyone to play tug of war or any other possible game that a dog and an extra large blanket could play, including tripping and falling by himself over that huge red blanket, with absolutely no grace. He played catch in the most gentle manner.  I’m thinking he would have been a great retriever had we trained him, because he had such a “soft mouth” and never fought over the items he returned to us.

He adored me – plain old me – in a way that I will never understand. The kids always knew where I was, by what could be called the “Boots Compass.” He would wait flat against the floor, paws in front of him and his nose resting between those paws, pointed in the direction of the doorway I had last entered, awaiting my return. Should I leave the house, he would watch out the window as long as he could, my husband said he also whined. He would watch and wait until my return, which was often met with that huge red blanket and a race or ten around the house.

He loved to be close to anyone who would give him extra attention and went from family member to guest, figuring that each would enjoy being able to rub his silky ears or scratch his back. His desire was to be right in the middle of whatever was going on.

He “helped” with dinner every night, watching as I chopped vegetables or fruit and waiting for a piece of lettuce, zucchini, apple, cantaloupe, tomato, banana, or any bit of egg or cheese that might come his way. We had to buy an extra pound or so of baby carrots a week just for him. We didn’t realize until after he was gone how clean he kept the kitchen floor.  Each empty yogurt container he claimed as his own, waiting patiently for the eater to finish it and then gratefully accepting it in order to lick out every single drop. He was worse than a cat when he heard the can opener on a tuna fish can! He’d race from wherever he was in the house to watch us as we would drain the liquid into his bowl which he would quickly lap up. Then he would happily grab up the empty tuna can and actually chew on it until we had to rescue it for fear he might actually ingest a piece. He checked the kitchen garbage regularly in case there was something yummy near the top.

He suffered for three years from seizures, and knew the cellphone alarm, Pavlovian response I assume,  each morning and evening that signaled the time for his anti seizure pills, which we gave him, covered in peanut butter on a little piece of whole wheat bread. He would come over and sit by the kitchen counter waiting ’til someone fed it to him.

We had him for five and a half years when he passed away, after we finally thought the seizures were under control, since he had been months and months without an episode. Sadly on a weekend, right after Valentines day, the seizures took him. It was devastating.

So, upon reflection on “Bruitsi” I know that I need to be more like our dog in the following ways:

It’s good to have fun – we need to have a merry heart – the Bible says it does good like a medicine. (Proverbs 17:22)

THESE ARE OTHER ATTITUDES I LEARNED FROM HIM:
Adoration – adoringly worshiping my Saviour,
Joy – joyfully serving my Lord,’
Anxiousness – anxiously watching and waiting for His return,
Faithfulness – faithful to Him and His house.
Closeness – close to Him, feeding on the wonderful food He has for me in His Word.

I want to be more like our faithful doggy.

Even now, after almost five years of his passing, I think of Boots often.  Last Sunday I pushed the chicken bones, leftover from lunch, deep in the trash, then remembered that there was no longer a need hide them from a prying chocolate brown nose.

Life Lessons from our Dog Boots